Getting A (Big) Jump On A Healthy Environment

In its nearly 20-year (and counting) process to secure approval to expand Gross Reservoir, Denver Water has committed to numerous environmental improvement projects, both on the Front Range and the West Slope.

While most of the projects are contingent on approval of the reservoir expansion, Denver Water has moved forward and even completed several of them — even as the expansion project awaits a final green light through Boulder County’s local land-use process and works through challenges in the courts.

It’s a sign of Denver Water’s dedication to the environment, to its partners and to the regulatory agencies that it is wrapping up environmental work years ahead of the first spade of dirt ever getting turned on the expansion of the reservoir in the foothills southwest of Boulder.

“Our No. 1 objective is to do right by our partners, by our customers and by the environment,” said Jeff Martin, project manager for the Gross Reservoir Expansion Project. “We’re committed to doing the expansion project the right way, so it made sense to move ahead early with these projects, to show — and not just talk about — our dedication to Colorado’s people and its ecosystems.”

Several projects designed to offset some of the impacts of the reservoir expansion such as work to improve fish habitat, to protect water quality and to set aside open space were essentially finished even before Denver Water received the Federal Energy Regulatory Commission’s Order last July approving the project.

Here's a brief look at some of the biggest Gross Reservoir expansion mitigation projects already wrapped up and their role in improving environmental conditions: 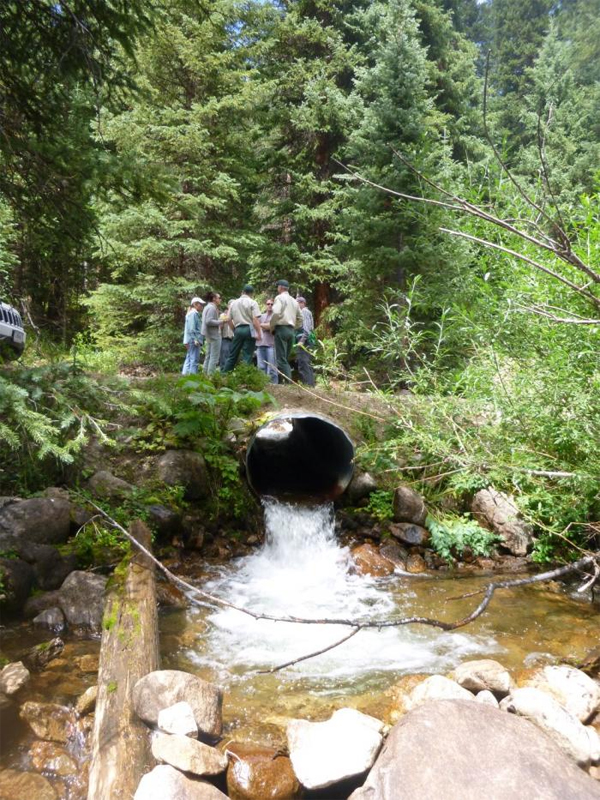 Crews with Denver Water and the U.S. Forest Service meet prior to removal of a traditional culvert that was later replaced with an "aquatic organism passage." Traditional culverts are harder for aquatic species to navigate, particularly during high flows. (Photo credit: Denver Water)

The completion of two other major projects over the past several years are the result of the Colorado River Cooperative Agreement, which has ties to the expansion of Gross Reservoir.

A wide view of some of the work on Fraser Flats shows how willows can shade the banks and cobble lining can direct flows into the central channel and create depth and pools – all habitat attractive to fish. (Photo credit: Denver Water)

Denver Water continues to push forward on several additional projects to protect fish and improve stream habitat. Some of the work was slowed by the COVID-19 pandemic in 2020.

These completed projects, along with work in progress and projects still to come, are part of a variety of agreements related to Gross expansion. Those include the Federal Energy Regulatory Commission Order, an agreement with the U.S. Forest Service and the CRCA.

Completion of the Gross Reservoir Expansion Project will allow for additional enhancements for the environment: a larger reservoir on the East Slope will give Denver Water more flexibility in how it moves water around its collection system on the West Slope.

That means for average and wet years, more water can be made available for coordinated releases in the Fraser and Williams Fork river watersheds in collaboration with Grand County Learning By Doing partners. Flushing flows and periods of high stream temperature will be targeted for these coordinated releases.

From Denver Water’s perspective, completing projects years ahead of full regulatory approval of the reservoir is simply the right way to do business and continues the collaborative process.