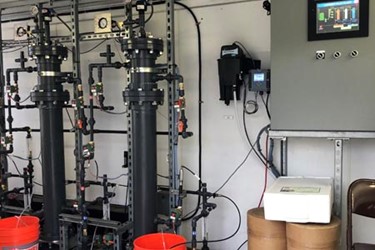 The City of Southgate, California wanted to investigate the effect of replacing the existing media in their Well 27 treatment plant. The plant would not reduce the incoming manganese levels to below the 50 μg/l MCL. It has been theorized that the existing media has become fouled beyond cleaning during the one year plus of non-operation while contained in the filter tank full of water. That environment could produce a likely source of biological and other sources of fouling.

Media manufacturer’s testing confirmed that the media cannot be regenerated to allow for a sustainable manganese removal capacity. Loprest Water Treatment Company presented a protocol for testing new media with a manganese greensand and anthracite combination at the existing plant site. The protocol consisted of four days of testing.