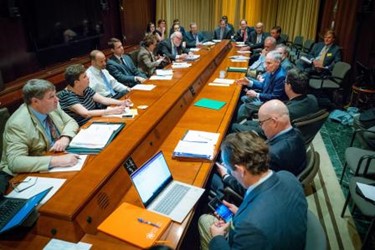 Washington -- Today, the U.S. Environmental Protection Agency (EPA) Administrator Scott Pruitt announced at a meeting with water sector associations that the deadline to submit letters of interest for Water Infrastructure Finance and Innovation Act (WIFIA) loans has been extended to July 31, 2018. Administrator Pruitt also sent a letter highlighting the deadline extension to governors of 56 states and territories as well as tribal leadership.

“By extending the deadline to apply for a WIFIA loan, even more entities will be able to bring critical water infrastructure improvements to their communities, including projects that keep lead and other contaminants out of drinking water,” said EPA Administrator Scott Pruitt. “These projects create jobs, protect public health, and help ensure that all Americans continue to have access to clean and safe water.”

EPA’s announcement comes as part of Infrastructure Week and highlights the importance of working together with the water sector on a variety of topics, including affordability, governance, and the Clean Water and Drinking Water State Revolving Funds (SRFs).

Established by the Water Infrastructure Finance and Innovation Act of 2014, the WIFIA program is a federal loan and guarantee program at EPA that aims to accelerate investment in the nation’s water infrastructure by providing long-term, low-cost supplemental loans for regionally and nationally significant projects. WIFIA can provide up to 49 percent of the financing for a project and a state SRF could provide additional financing for the remaining eligible project costs. The WIFIA program received $63 million in funding in the Consolidated Appropriations Act, 2018, which was signed into law by President Donald Trump on March 23, 2018.

On April 4, 2018, EPA announced the availability of additional WIFIA funding that could provide as much as $5.5 billion in loans, leveraging over $11 billion in water infrastructure projects. This year’s WIFIA Notice of Funding Availability highlights the importance of protecting public health, including reducing exposure to lead and other contaminants in drinking water systems and updating the nation’s aging infrastructure.

On April 20, 2018, EPA issued its first WIFIA loan to King County, Washington. The $134.5 million loan will help finance a new wet weather treatment station that will better protect public health, improve water quality, and create more than 1,400 jobs—all while saving up to $32 million compared to standard financing over the life of the loan.

According to EPA’s estimate of drinking water and wastewater needs, over $743 billion is needed over the next twenty years for water infrastructure improvements. WIFIA financing and the SRFs will play an important part in fulfilling this need. With the latest two appropriations totaling $93 million, WIFIA loans can be combined with other public and private funding, to finance approximately $16 billion in infrastructure needs. EPA’s FY2018 budget includes $2.9 billion for the SRFs.

For more information about the WIFIA program and resources to use when applying, visit www.epa.gov/wifia.