Researchers led by Professor MATSUYAMA Hideto and Professor YOSHIOKA Tomohisa at Kobe University’s Research Center for Membrane and Film Technology have succeeded in developing an ultrathin membrane with a fouling-resistant silica surface treatment for high performance separation of oil from water.

Furthermore, this membrane was shown to be versatile; it was able to separate water from a wide variety of different oily substances.

These results were published online in the ‘Journal of Materials Chemistry A’ on October 3 2019.

The development of technology to separate oil from water is crucial for dealing with oil spills and water pollution generated by various industries. By 2025, it is predicted that two thirds of the world’s population won’t have sufficient access to clean water. Therefore the development of technologies to filter oily emulsions and thus increase the amount of available clean water is gaining increasing attention.

Compared with traditional purification methods including centrifugation and chemical coagulation, membrane separation has been proposed as a low cost, energy efficient alternative. Although this technology has been greatly developed, most membranes suffer from fouling issues whereby droplets of oil get irreversibly absorbed onto the surface. This leads to membrane pore blocking, subsequently reducing its lifespan and efficiency.

One method of mitigating the fouling issues is to add surface treatments to the membrane. However, many experiments with this method have encountered problems such as changes in the original surface structure and the deterioration of the treated surface layer by strong acid, alkaline and salt solutions. These issues limit the practical applications of such membranes in the harsh conditions during wastewater treatment.

In this study, researchers succeeded in developing a membrane consisting of a porous polyketone (PK) support with a 10 nano-meter thick silica layer applied on the top surface. This silica layer was formed onto the PK fibrils using electrostatic attraction- the negatively charged silica was attracted to the positively charged PK.

Figure 1: SEM images and diagram showing the formation of the ultrathin silica layer on the porous membrane.

The PK membrane has a high water permeance due to its large pores and high porosity. The silicification process- the addition of silica on the PK fibrils- provides a strong oil-repellant coating to protect the surface modified membrane from fouling issues.

Another advantage of this membrane is that it requires no large pressure application to achieve high water penetration. The membrane exhibited water permeation by gravity- even when a water level as low as 10cm (with a pressure of approx. 0.01atm) was utilized. In addition, the developed membrane was able to reject 99.9% of oil droplets- including those with a size of 10 nanometers. By using this membrane with an area of 1m2, 6000 liters of wastewater can be treated in one hour under an applied pressure of 1atm. It was also shown to be effective at separating water from various different oily emulsions. 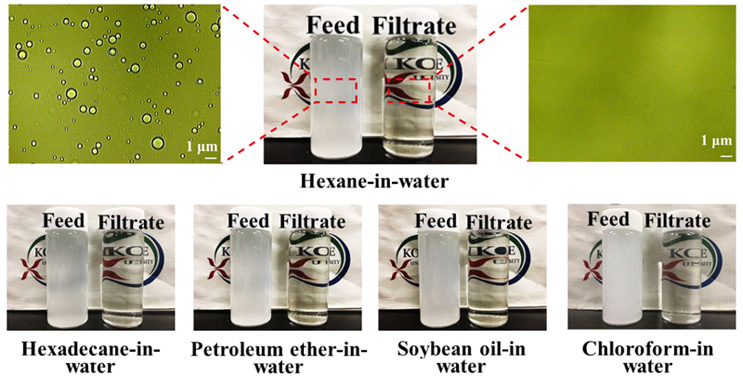 Figure 2: Various oily emulsions before (left) and after (right) the membrane permeation.

As mentioned, the silification provided a strong oil repellant coating. Through the experiments carried out on the membrane to test its durability against fouling, it was discovered that oil did not become adsorbed onto the surface and that the oil droplets could be easily cleaned off. This membrane showed great tolerance against a variety of acidic, alkaline, solvent and salt solutions. 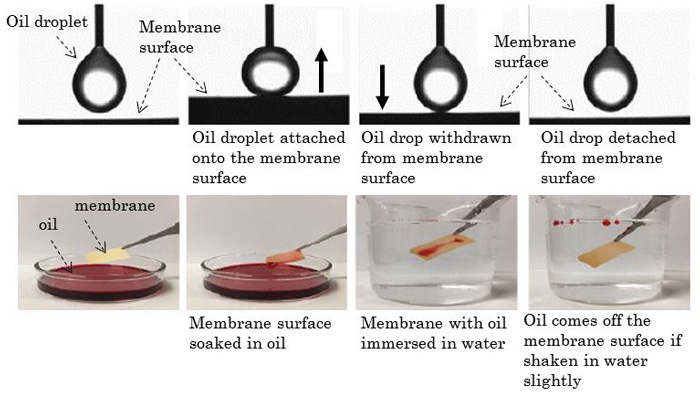 The ultrathin membrane developed by this research group has demonstrated efficient separation of water from oily emulsions, in addition to anti-fouling resistance. Technology to separate emulsions is indispensable in the fight against water pollution and clean water shortages. It is hoped that this development could be utilized in the treatment of industry waste water.