Desalination Innovation In The UAE

A delegation of prominent UAE government and private sector representatives, organized by Masdar, will be attending the 7th World Water Forum in Daegu and Gyeongbuk, South Korea, from April 12 to 17. The delegation will showcase the country’s adoption of innovative technologies as a means to ensure a water secure future and address the inter-connected challenges of the energy-water nexus with the global community.

Desalination has been the primary source of potable water in arid regions for years, and a critical component of sustaining life, economic growth, and expansion in the Gulf region. The overall installed capacity in this region amounts to around 40 percent of the world’s desalinated water capacity, and the United Arab Emirates (UAE) stands the second-largest producer following the Kingdom of Saudi Arabia.

The UAE relies on desalination as a primary source of potable water. These plants are powered by natural gas and contribute to almost a third of the UAE’s greenhouse gas emissions. In the past, the desalination market in the Middle East was largely driven by strength rather than efficiency, and water production was realized through costly and resource-intensive processes. Traditional desalination techniques are not sustainable methods for long-term water security

Energy consumption in the desalination sector is a typical case where innovation has played an important role, especially in the last decade. The energy consumption of seawater reverse osmosis (SWRO) technology has dropped to levels in the range of 4 to 5 kilowatt-hours per cubic meter (kWh/m3), thanks to both the adoption of more sophisticated energy recovery devices and also to the development of membranes that can operate at higher recovery and better flux.  However, the energy intensity required even by state-of-the-art desalination plants is still high and represents a real barrier to allow a medium- to large-scale desalination plant to be powered economically by a renewable energy source.

Today, however, the situation is shifting as the UAE steers away from this challenge towards a more sustainable direction.  Turning to a more sustainable method of clean water production can minimize long-term costs and reduce carbon emissions. The UAE is committed to further advancing industrial-scale, sustainable desalination technologies capable of meeting the region’s future demand for fresh, clean water. Recognizing the link among energy, water, and food, the UAE is investing heavily in cutting-edge technologies to improve the efficiency and reduce the environmental impact of the desalination process.

By bridging the gap between research and development (R&D) and commercialization, the UAE is providing an opportunity for scale-up of technologies that address water access, while also reaping economic, social, and environmental benefits through capitalizing on the region’s abundance of renewable resources such as solar and geothermal energy.

Masdar, Abu Dhabi’s renewable energy company, launched the Renewable Energy Desalination Programme in January 2013, following a mandate from the capital’s leadership. This forward-thinking mandate directed Masdar to develop and demonstrate advanced and innovative technologies in desalination to both ensure water security and reduce energy consumption in the sector to meet the country’s energy reduction targets. 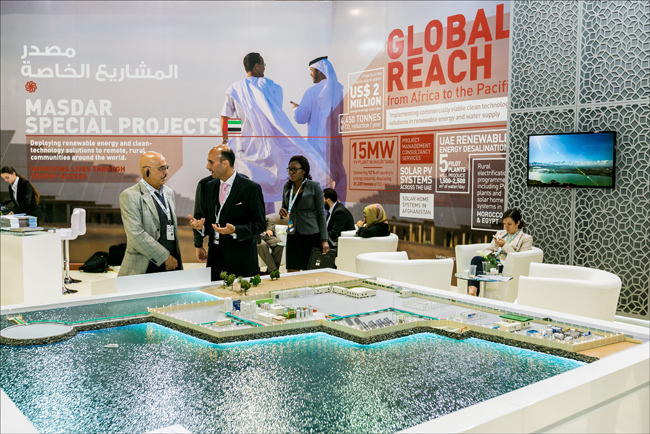 Model of Masdar's Solar-Powered Desalination Pilot Programme, currently under construction in Ghantoot, Abu Dhabi, to be showcased at the 7th World Water Forum

The goal of this pilot program is to identify industrial-scale and commercially viable desalination technologies that will address sustainable access to water both in the arid region and globally. As such, in February 2013 Masdar invited around 180 companies and organizations in the water desalination industry to participate in the program. The evaluation process was conducted in two phases: qualification, followed by down-selection of four technologies. After a thorough evaluation process, Masdar chose to partner with well-known players in the desalination industry (Abengoa Water, Suez Environnement, and SIDEM/Veolia) and an innovative Californian start-up company, Trevi Systems. 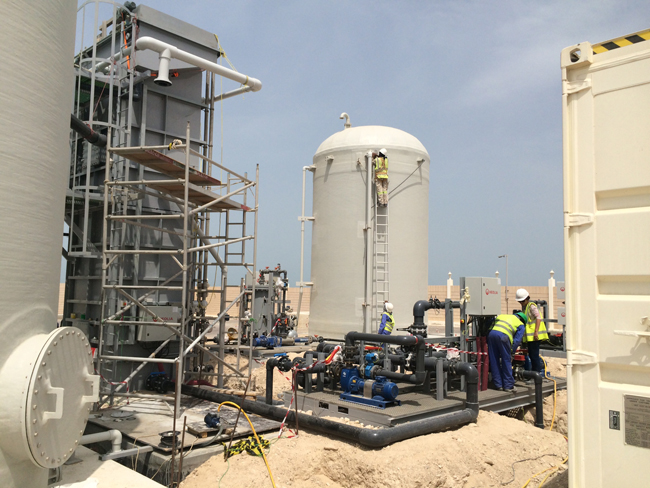 Advanced desalination technologies are defined as technologies that are based on commercially proven and used desalination systems (using thermal, membrane, or other processes) and that are further optimized and improved as part of the scope of the program to reduce the specific energy consumption of the system and to enhance its compatibility for coupling with renewable energy sources. The advanced technologies for this pilot are expected to have the potential to lower energy consumption to reach less than 3.6 kWh/m3 of electric energy for reverse osmosis (RO) plants.

Following the initial 18-month piloting phase, Masdar will implement the second phase of the program. Phase 2 envisages the large-scale deployment and implementation of the developed energy-efficient desalination technologies, including one or more large-scale desalination plants, in the UAE and wider MENA region, powered by geothermal, solar ponds, solar thermal collectors, photovoltaic (PV) systems, concentrated solar power, wind turbines, ocean energy, or a combination of the plethora of clean energy sources noted above.

In collaboration with the desalination program partners, Masdar’s academic arm, Masdar Institute, is at the same time performing different R&D projects complimentary to the program. The R&D projects cover topics such as the study, evaluation, and mitigation of membrane scaling and fouling in membrane distillation; optimized design of a full-scale, solar-energy-powered SWRO; capacitive de-ionization for treatment of permeates from the first pass RO; and development and testing of novel forward osmosis membranes and manufacturing techniques.

The pilot program, which specifies sustainability and energy efficiency as the primary focus, represents a novel approach to an industry-wide challenge and is designed to create the right synergies between the academic and research worlds, industry, and public institutions. Initiatives such as Masdar’s pilot program demonstrate the UAE’s commitment to offering the best of its minds and facilities to help solve some of the region’s and world’s most pressing needs

With the UAE Innovation Strategy driving government entities to increasingly dedicate resources to research and innovation projects, we are confident that more research collaborations will come to fruition in 2015, helping draw the region closer to its ambitious but critical sustainable development goals, and devising innovative solutions for the world at large.