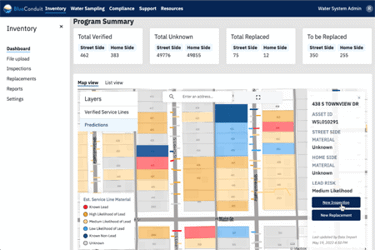 BlueConduit Has Inventoried over 1 Million Lead Pipes in and Worked with Over 50 Cities in the U.S. and Canada

“BlueConduit’s AI technology and data-driven approach has helped city officials proactively address lead pipes and help simplify a complex process, making residents safe and happy. It also saves taxpayers and utilities money,” said Eric Schwartz, co-founder of BlueConduit. “BlueConduit was the first to develop this method and we have been inventorying and identifying lead service lines since 2016.”

The company has completed the most predictions and analysis, making its software the most accurate. Available to cities, water utilities and engineering companies, BlueConduit has helped more than 50 U.S. cities, including Flint, Detroit, Trenton, and Toledo, save hundreds of millions of dollars. BlueConduit has inventoried over 1 million service lines which serve over 2 million people.

Most recently, the City of South Bend, Indiana, contracted with Blue Conduit to create an inventory of its lead service lines.

“Since property owners in South Bend own the water lateral from the main to the home or business, the City has few records on service line materials,” says Michelle Smith, director of water quality for the City of South Bend. “We are excited to work with BlueConduit’s service line predictions platform to identify where lead service lines exist so we can proactively educate our customers and develop a plan to replace them.”

BlueConduit’s software takes current data about lead pipes, formulates an inspection plan to verify what is known and unknown, and makes predictions of presence of the lead service lines. It provides real-time maps on a dashboard to water utility managers and the consumers can see progress on lead pipe replacements in their community.

The BlueConduit platform offers utilities and their residents:

About BlueConduit
BlueConduit is a water analytics company that has the most accurate predictive machine-learning methods to locate lead service lines, empowering local officials with the information to efficiently remove those pipes. Named one of TIME’s Best Inventions of 2021, the company’s model enables utilities to focus their resources on digging where the lead is, accelerating the removal of this significant health concern, and saving millions of dollars in avoided digs. Access to the BlueConduit platform Free tier is supported in part through grants from Google.org and the Rockefeller Foundation. Since 2016, BlueConduit has worked with over 50 municipalities and inventoried over 1 million service lines, which serve more than 2 million people. For more information, visit BlueConduit.com.