As Climate Change Parches The Southwest, Here's A Better Way To Share Water From The Shrinking Colorado River 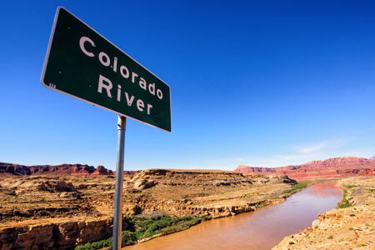 The Colorado River is a vital lifeline for the arid U.S. Southwest. It supplies water to seven states, Mexico, 29 Indian reservations and millions of acres of irrigated farmland. The river and its tributaries support 16 million jobs and provide drinking water to Denver, Salt Lake City, Albuquerque, Las Vegas, Los Angeles, San Diego, Phoenix, and Tucson — in all, 40 million people.

These rivers also course through several of the world’s most iconic national parks, including the Grand Canyon in Arizona and Canyonlands in Utah. Today millions of people visit the Colorado River Basin to fish, boat and explore.

Southwestern states, tribes, and Mexico share the Colorado’s water under the century-old 1922 Colorado Compact and updates to it. But today, because of climate change and rapid development, there is an enormous gap between the amount of water the compact allocates to parties and the amount that is actually in the river. With users facing unprecedented water shortages, the compact is hopelessly inadequate to deal with current and future realities.

I have studied water resource development for 35 years and written extensively about Native American water rights and the future of America’s rivers. As I see it, the compact rests on three fundamental errors that now plague efforts to develop a new vision for the region. I believe the most productive way forward is for states and tribes to negotiate a new agreement that reflects 21st-century realities.

The compact commissioners made two fatal blunders when they allocated water in 1922. First, they appraised the river’s volume based on inaccurate data that wildly overestimated it. Actual annual historic flows were far below what was needed to satisfy the dictates of the compact.

There is evidence that the commissioners did this purposefully: Reaching an agreement was easier if there was more water to go around. This strategy guaranteed that the compact would allocate more water than was actually in the river, a situation now referred to as the “structural deficit.”

Second, the compact allocated water in fixed amounts rather than percentages of the river’s actual flow. That approach would be viable if river flow were constant and the agreement were based on sound science. But the Colorado’s flow is highly variable.

The compact divided the river artificially into an Upper Basin (Wyoming, Colorado, Utah, and New Mexico) and a Lower Basin (Arizona, Nevada, and California), and allocated 7.5 million acre-feet of water to each basin. An acre-foot is enough water to cover an acre of land to a depth of one foot, or about 325,000 gallons.

In the past 20 years, climate change has further reduced the Colorado’s volume. A “megadrought,” now in its 21st year, has reduced flows by nearly 20 percent, and studies predict that it will fall 20 percent to 35 percent or more by midcentury. In late August 2021, Lake Mead, the nation’s largest reservoir, was just 35 percent full. Lake Powell, the second-largest U.S. reservoir, was less than 30 percent full.

That month, the Bureau of Reclamation declared an official shortage, which will force Arizona, Nevada, and Mexico to make significant cuts in water use. In short, the original fixed allocations are no longer anchored in reality.

In my view, a much better approach would be to allocate water among the states and tribes in percentages, based on a five-year rolling average that would change as the river’s flow changes. Without such a shift, the compact will merely perpetuate a hydrological fallacy that leads water users to claim water that does not exist.

Beyond these errors, the compact also rests on a fundamental injustice. The 30 tribal nations in the Colorado River Basin are the river’s original users, and their reservations encompass huge swaths of land. But they were completely left out of the 1922 allocations.

Compact commissioners, whose views reflected the overt racism of that era, assumed Native peoples did not deserve their own allocation. Making matters worse, nearly every statute, compact, and regulation promulgated since 1922 — a body of rules known collectively as the Law of the River — has either ignored or marginalized Native water users. Many tribes, scholars, and advocacy groups view this as an injustice of monumental proportions.

Tribes have gone to court to claim a share of the Colorado’s water and have won significant victories, beginning with the landmark 1963 Arizona v. California ruling, in which the U.S. Supreme Court recognized water rights for five Indian reservations in the Colorado River Basin. The tribes continued to press their claims through numerous negotiated settlements, starting in 1978 and continuing to this day. They now have rights to over 2 million acre-feet of water in the Lower Basin and 1.1 million acre-feet in the Upper Basin. And 12 tribes have unresolved claims that could total up to 405,000 acre-feet.

Currently, however, tribes are not drawing all of their water because they don’t have the pipelines and other infrastructure that they need to divert and use it. This allows non-Indian communities downstream to use the surplus water, without payment in most cases. I believe a new compact should include tribes as equal partners with states and give them meaningful and significant roles in all future negotiations and policymaking in the basin.

The compact states are now renegotiating interim river management guidelines that were first adopted in 2007. This process must be completed by 2026 when that agreement expires.

I see these discussions as an excellent opportunity to discard the compact’s unworkable provisions and negotiate a new agreement that responds to the unprecedented challenges now affecting the Southwest. As I see it, an agreement negotiated by and for white men, based on egregiously erroneous data, in an age when people drove Model T cars cannot possibly serve as the foundation for a dramatically different future.

In my view, the 1922 compact is now an albatross that can only inhibit innovation. Eliminating fixed rights to water that doesn’t actually exist could spur members to negotiate a new, science-based agreement that is fairer, more inclusive, and more efficient and sustainable.