Hurricane Isaias stormed up the east coast of the United States in early August, bringing heavy rain and winds up to 85 mph to the shores of flood-prone Port Monmouth, NJ. Immediately, the U.S. Army Corps of Engineers, New York District reached out to the community to find out how they were doing and how its flood risk management project was working.

Port Monmouth resident Charles Rogers responded, "The system of tide gates and pump stations allowed all of the streets that normally flood under these conditions to drain properly. Port Monmouth fared well in the storm."

Ted Maloney, township engineer for Middletown, NJ, also responded, "It was good to see the system in action and performing as designed. This is empirical evidence that the Army Corps floodgate and pumps worked swimmingly!"

This type of responsive communication between the Army Corps and the communities it serves is nothing new, especially with flood risk management projects.

This doesn't happen just when a storm hits; it takes place throughout the entire project process. The Port Monmouth Flood Risk Management Project is just one perfect example.

The project that is undergoing construction is the community of Port Monmouth, along the northern New Jersey coast along the Raritan and Sandy Hook Bays in Monmouth County. 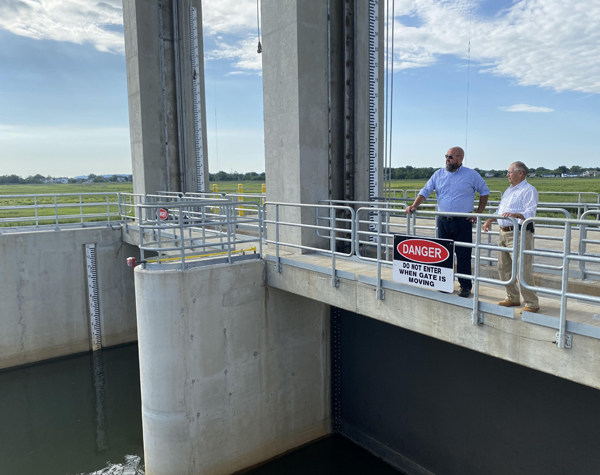 The area has been battered by flooding, blizzards, and major storms for years, especially by Hurricane Sandy in 2012, that destroyed 750 homes and businesses.

"Sandy placed almost four feet of water in my house and six feet in my cellar and we lost our heating, electric, food, and personal items," said Rogers, who has lived in Port Monmouth for 82 years and has weathered his share of storm events.

These storms have eroded much of the natural beachfront and dune complexes that provide coastal protection to the community from storm surge.

The goal of this project is to help reduce the risk of flooding throughout the entire community.

The Army Corps is performing this work in partnership with the New Jersey Department of Environmental Protection Bureau of Coastal Engineering, as well as with the local community.

William Dixon, Director of Coastal Engineering, New Jersey Department of Environmental Protection said, "We have a long-standing, strong partnership with the Army Corps and work on a lot of projects with them. Partnership and collaboration are one of the reasons why New Jersey, the Army Corps, and local municipalities has been so successful in implementing so many projects, including the Port Monmouth project that is a very complex one." 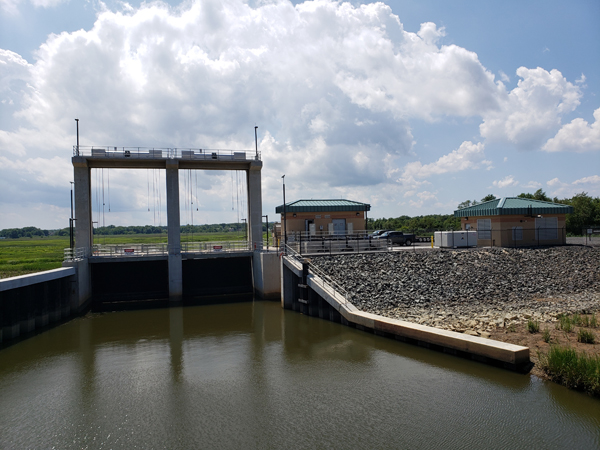 Work that was completed to date includes building up and widening the shoreline along the Sandy Hook Bay by replenishing sand and constructing a new stone groin perpendicular to the shoreline.

A groin structure extends out from the shore into the water and interrupts water flow and limits the movement of sand, to prevent beach erosion and increase resiliency.

In addition, a 15-foot-high protective dune was constructed that spans a mile and a half long. Dunes provide a natural barrier to the destructive forces of wind and waves.

While constructing the dune, residents of a beachside condominium complex expressed to the Army Corps that they were concerned that the dune would obstruct their access to the beach.

David Gentile, project manager for the U.S. Army Corps of Engineers, New York District, said, "We met with the condo's board members and other agency team members on several occasions to discuss options, get and provide feedback, and review plans. In the end, we received a necessary easement that allowed us to construct a walking path to provide the public access to the beach area. This satisfied the public, residents, and the condo association."

As part of this work, the Army Corps also extended a fishing pier by 195 feet, expanding on the area's recreational use by the community.

Presently, work is being accomplished to create a line of defense surrounding Port Monmouth. This work includes constructing a concrete floodwall — the length of almost 22 football fields — to reduce flooding from two creeks - Pews Creek to the west and the Compton Creek to the east. 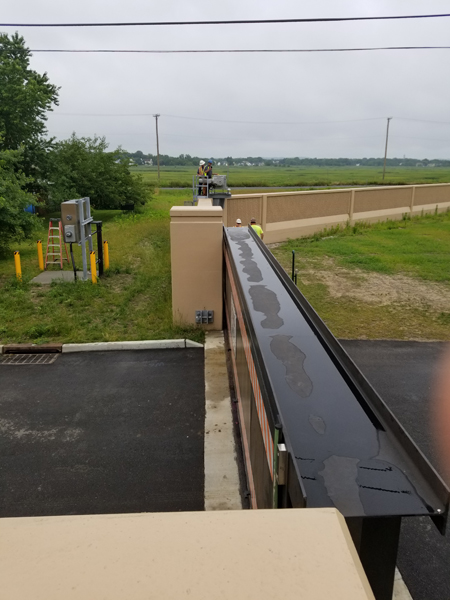 A floodwall is a vertical barrier designed to temporarily contain the waters of a river or other waterway which may rise to unusual levels during seasonal or extreme weather events.

The project also includes a 7,070-foot levee system that is the length of almost 20 football fields. A levee is an embankment designed to prevent flooding.

In order for the levee to do this, it needs a strong soil foundation to support it. The land in the area is made up of low-lying salt and freshwater marsh that is not strong and very saturated.

To strengthen this soil, the Army Corps used an environmentally friendly soil stabilization process called Situ Soil Stabilization. This process strengthens the soil — by mixing it with cement and water — so that it can hold up a levee system.

"Typically, we would dig up the marshy soil and haul it out and truck in new soil," said Gentile. "By doing this process, we eliminated the need for over 1,750 tri-axle trucks trips, carrying wet, mucky, and odorous material through residential streets, as well as saved a great deal of money."

The community was consulted before this process was used. Rogers said, "When this process was put on the table, we thought it was a good decision. It was a big plus for the project, the residents, and the environment."

As part of the defense surrounding Port Monmouth, pump stations, road closures, and a tide gate at Pews Creek were constructed.

A pump station pumps or drains water from low-lying land and tide gates allow water to flow freely under normal conditions and close automatically to prevent flood waters from flooding a community. 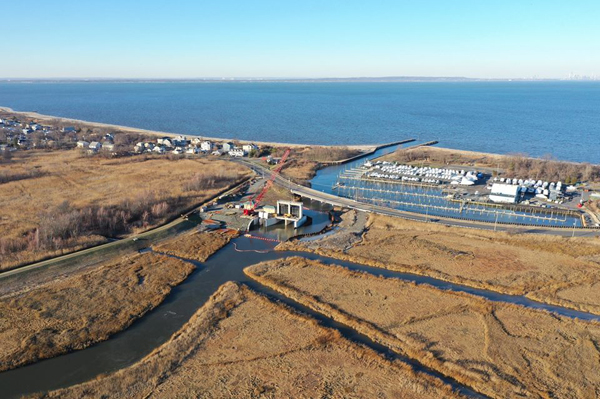 Aerial of the Port Monmouth Flood Risk Management Project. In the center is the flood gate and pump station. December 2019. (Credit: Charles Rogers)

When these were being constructed, the community expressed concern about the costs of operating and maintaining this system.

Gentile said, "For the tide gate and pump station structure, we provided the community training and testing of the system, so that they would feel more comfortable in taking the system over."

Rogers said, "We met when it was high tide and the Army Corps explained to us how the tide gates work during a storm at high tide. All of us were pleased with the explanation. In fact, all of the meetings I've attended were always run very professionally and the Army Corp is always well prepared. At the end of them all, we come to resolutions that have been in the best interest of all of those involved."

Gentile added, "It is important to consider and promptly address the requests and feelings for all the people involved with the project, including the residents, partnering agencies, and utility companies, counties, and municipalities to allow the projects to move forward as smooth as possible."

If anyone values how the Army Corps works with communities, it's life-long Port Monmouth resident Rogers, who has experienced many storm events over his lifetime.

Rogers said, "During the 1944 Great Atlantic Hurricane, my father placed me on his shoulders and walked through four feet of water to take me to my grandmother's house. During Hurricane Donna in 1960, the area was evacuated, and my entire family were transported by the U.S. Coast Guard via an amphibious vehicle to the firehouse to safety. And during Hurricane Sandy in 2012, my house was flooded and we lost a lot. Without the help of the Army Corps, flood-prone areas would never receive the protection needed to keep property and residents safe."

The Port Monmouth Flood Risk Management Project is expected to be completed in 2023 and is designed to provide flood protection that can withstand another Hurricane Sandy.

Dr. JoAnne Castagna is a Public Affairs Specialist and Writer for the U.S. Army Corps of Engineers, New York District. She can be reached at joanne.castagna@usace.army.mil.