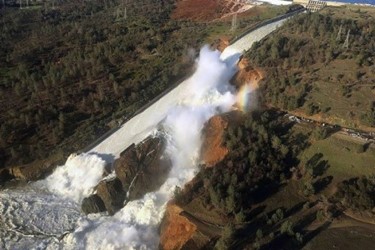 America’s water is under threat from many sides. It faces pollution problems, outdated infrastructure, rising costs, and unprecedented droughts and rainfall patterns as the climate changes. Yet at a recent event hosted by the Columbia Water Center, the tone was cautiously optimistic, and the conversation centered on solutions.

“If we have aging infrastructure that’s falling apart, and we’re dealing with climate variability and change, isn’t that a good opportunity to actually do something?” suggested Upmanu Lall, director of the Columbia Water Center.

For decades, the U.S. has been a leader in water management. Now we’re falling behind; in the latest infrastructure report card, dams, drinking water and wastewater all received D ratings. But Lall thinks the country could get an A. Here are some of the solutions, presented at the event, that could help to get us there.

Create National-Level Governance
Water is very good at ignoring municipal boundaries, so one town’s water use or pollutant dumping can affect other cities or states that rely on the same water supply. That’s why many countries — including, the U.K., Canada, Australia, and Mexico — have a national water authority or commission that oversees water management across the country. Not so for the U.S.

“In the U.S., we’re exactly the opposite,” said Hubert Fleming, head of Global Water Management at Anglo American. Instead, he said, the nation’s water is managed by “58,000 municipalities, every single one of them doing their own thing.” That makes it difficult to initiate and complete more ambitious, regional projects.

Bottom line: If we want nice things, we have to be willing to pay for them.

Make It Easier for Private Investors
Jennifer Wu, director of BlackRock Sustainable Investing, said that many investors are interested in investing in water-related issues, but they want to know more about the social and environmental effects their investments will have. The problem, said Wu, is that there are a lot of inconsistencies in how companies report these estimates. She suggested that investors, academics, and regulators need to team up to create a standardized system of evaluating the impacts of sustainable investments.

“If we can’t provide consistent and robust impact measurement, it is really hard to attract more capital in this space,” said Wu.

Another challenge, she added, is getting investors to understand how complex and important water is, since it affects agriculture and many other business sectors. “How do we paint a holistic picture when we talk to investors, so that they understand that if they don’t allocate capital to water issues, it’s actually going to impact other parts of their portfolios?” she asked. “To do that, we actually need better impact measurements.”

Look to the Past and the Future
As part of the  America’s Water, the Columbia Water Center is looking deep into the past to understand the types of droughts and floods that we may still be vulnerable to today. For example, in the past 500 years, the longest drought in the Northeast lasted 16 years. And southern Mississippi once suffered through a 64-year drought. Data like this helps to inform the kinds of water infrastructure we may need in the future.

“If we were subjected to these kinds of droughts today, I would submit to you that we actually have no plan on how we could deal with this,” said Lall during the conference.

He and his team are also evaluating the effects of current water infrastructure. Currently there’s a big push to remove dams, many of which have outlived their designed lifetimes and disrupt natural ecosystems. Using a detailed and comprehensive model, the Columbia Water Center is evaluating the costs and benefits of removing these dams—looking at, for example, how helpful might they be as climate change disrupts rainfall patterns, versus how many people and businesses might be at risk if they fail.

As the climate changes, so will human needs. Fluctuations in heat, humidity, and rainfall patterns are going to shape where we live, grow food, and produce energy. The Columbia Water Center is helping to analyze and predict these trends, so that Americans will continue to have water whenever and wherever they need it.