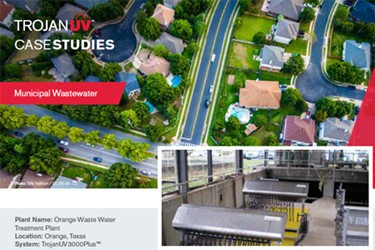 The city of Orange in Orange County, Texas, is located about 100 miles east of Houston, Texas, and approximately 30 miles due north of the Gulf of Mexico. It is the state’s easternmost city and home to the Orange Waste Water Treatment Plant (WWTP). Located along the Sabine River, this municipal wastewater treatment plant with a peak capacity of 24 MGD serves 18,000 residents and comprises of the following unit processes: bar screens, grit removal, primary treatment, trickling filter followed by sedimentation and finally, UV disinfection. The Sabine River is 510 miles long and in its lower course, empties into Sabine Lake, which is an estuary of the Gulf of Mexico.

In early 2010, it was determined that the 20-year-old disinfection system at the Orange WWTP – a TrojanUV3000™ – was no longer able to meet the new Texas Commission on Environmental Quality (TCEQ) 217 Regulatory Requirements. During this time, the TCEQ was in the process of changing the permit of several plants that had an ultimate impact on the coastal discharge. As a result, Orange WWTP’s (old) E.coli permit was changed to a new and more stringent Enterococci limit with the requirement to meet a daily maximum limit. Given the aging UV system and the new regulatory requirement imposed by the TCEQ, a disinfection system replacement was in order. In addition to selecting a system that was cost-effective and energy efficient, it also needed to be able to withstand flood events because the Orange WWTP is uniquely located a mere eight feet above the mean sea level.