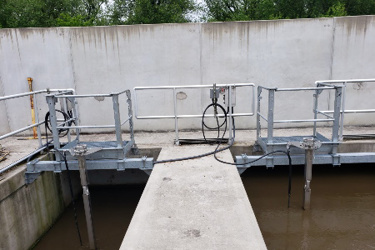 The introduction of five Landia mixers has brought about significant improvements to the biological and dewatering processes at the recently upgraded Wastewater Treatment Plant (WWTP) in Milton, Pennsylvania.

Serving six municipalities in Northern Northumberland County, the new-look Milton Regional Sewer Authority (MRSA) WWTP has been designed so that it is powered by anaerobic treatment of wastewater from the nearby ConAgra food facility (makers of brands such as Healthy Choice ravioli and spaghetti meals)

During the design of the upgraded plant, demand for ConAgra products had led to an increase in its production, which in turn created an organic overload in the treatment plant’s aeration tanks. And due to the anticipated removal of ConAgra’s settling processes, the strength of the food producers’ wastewater was expected to rise by up to one third.

Seeking a cost-effective wastewater treatment solution that would also resolve high sludge disposal charges and mounting energy costs, plant operators at Milton saw the opportunity for anaerobic pre-treatment. This would not only reduce the load on the aeration tanks, but also provide renewable energy in the form of biogas.

Two full-scale 7.5 million-gallon (28,000 m3) reactors were installed – designed to remove approximately 90% of the organic load from ConAgra’s wastewater, which totals between 1 and 1.5 million gallons per day. As well as the wastewater, the reactors can also receive septage and other hauled wastes.

Loading was off the chart
“The flow was very low”, he said, “so everything kept settling out. With ConAgra’s wastewater and the 7,000 people in the Milton area that the plant serves, our loading was off the chart. No nutrients and very high BOD. We had to keep solids in suspension but two of our channels couldn’t be taken out of service”.

A solution was found by installing four submersible mixers made by Landia. These Landia model POP-I gear-driven mixers, complete with guide rail assemblies and service platforms, were installed in the influent, effluent and return channels of the nutrient removal tank system. The mixers, two 2.4HP and two 4.9HP units, were specifically sized for each of the channels to provide optimum mixing in the areas where the plant was previously experiencing an accumulation of solids. To avoid conflict with an existing 20-inch sub-surface pipe, which runs through the return channel and the influent channel, Landia supplied custom-built service platforms to allow for mixer installation without draining the tanks. Landia’s customized solution allowed the plant to continue operating with no interruptions throughout the mixer installation phase.

Derr added: “This was essential – and we soon found out that Landia is an enthusiastic and determined problem-solving company – much more than an equipment manufacturer. They listened to our needs. We were confident that the mixers would resolve the issue with the solids, but we wanted a more central placing, rather than have them anchored on to the concrete walls at the side.

He continued: “To provide us with the optimum solution, Landia designed and built us a guide-rail and retrieval system, complete with a walk-in-cage service platform. Our team took care of the installation, whilst Landia were in attendance for a dry test of the mixers. Everything fit together, with no problems. The new Landia mixers are all running very well. We have a definite improvement in volumes, with all channels now properly mixed and looking good. It was a major advantage to be able to carry out the install without having to stop the flow.”

The upgrade at Milton (primarily funded by the United States Department of Agriculture and supplemented by additional grants through H2O PA, the Growing Greener initiative and PA Conservation Works) has expanded wastewater capacity from 3.42 MGD to 4.25 MGD and also doubled its organic capacity to nearly 50,000 pounds per day.

The dewatering process of removing sludge from the reactors in to a holding tank created another issue for the plant team at Milton.

“The sludge on our belt was very inconsistent”, commented Victor Derr.

“The belt would appear to be running fine, then there’d be a washout with water, followed by a very heavy pocket of sludge. This meant we couldn’t really leave it unattended because sooner or later we knew it was going to stratify”.

100 per cent better
The answer again, as with the biological process, was to get everything mixed – properly. A fifth submersible mixer from Landia was installed in the sludge decant tank to homogenize the sludge prior to dewatering.

“Since we installed a Landia mixer as part of the dewatering process, the belt press is 100 per cent better”, added Derr.

“It now takes care of itself, as it should. Before we had the Landia mixer, we were running at 50 gal/min – and having to put in lots of time, but now, without the previous vortex, we’re up at 85 gal/min, with no sign of those washouts or the big pockets of sludge”.

As a by-product of the anaerobic reaction, the reactors create valuable biogas containing approximately 75% methane, which is burned in two 1,000 kW gas engines to generate electricity - sufficient to offset the power the wastewater treatment process utilizes. This helps Milton reduce annual electricity costs by selling excess electricity to the local utility. The upgrade also included the installation of a belt dryer, which utilizes excess heat from the generators to dry the remaining biosolids.

Victor Derr concluded: “The Landia mixers have been essential for the Milton WWTP staff to optimize the plant’s operation by providing superior mixing and reducing staff time associated with dewatering”. For more information, visit www.landiaworld.com