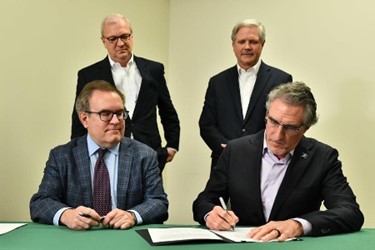 Recently, U.S. Environmental Protection Agency (EPA) Administrator Andrew Wheeler signed a Memorandum of Understand (MOU) with North Dakota Governor Doug Burgum, on behalf of the Interstate Oil and Gas Compact Commission (IOGCC), that renews the agency’s commitment to collaborate with the IOGCC. In addition, Wheeler announced that EPA is inviting the Metro Flood Diversion Authority (MFDA) to apply for the third round of Water Infrastructure Finance and Innovation Act (WIFIA) funding for a stormwater management project in Fargo.

“It is a privilege to renew and strengthen EPA’s collaboration with IOGCC in North Dakota – a state that has been at the forefront of America’s energy renaissance. The United States is a global leader in providing affordable, reliable energy in a manner that protects public health and the environment, and this MOU will further our progress,” said EPA Administrator Andrew Wheeler. “I was also pleased to announce that EPA is inviting the Metro Flood Diversion Authority to apply for a water infrastructure loan for a project that would protect hundreds of thousands of North Dakotans from flooding.”

“This hugely important loan will reduce the tax burden of the diversion project and give assurances to taxpayers, state legislators and the private market that the project is affordable and moving forward,” said Governor Doug Burgum. “We’re deeply grateful to the EPA and Administrator Wheeler for making this financing available and for signing the MOU renewing the EPA’s commitment to this longstanding partnership between the states and federal government. No one cares more about a state’s land, water and air than the people who live there, and by working with the EPA we can ensure we’re utilizing the best practices and policies to protect human health and our natural resources for current and future generations.”

“I applaud Administrator Wheeler for moving this loan forward and demonstrating once again that the Trump Administration is an attentive, responsive administration, meeting the needs of local communities in North Dakota and across the country,” said Senator Kevin Cramer. “Our Congressional delegation wrote a letter to Administrator Wheeler urging this action because completing this project means helping protect the lives, livelihoods, and properties of thousands of North Dakotans.”

“We’ve worked hard in recent years to ensure flood protection in the Red River Valley can use the WIFIA program to reduce project costs,” said Senator John Hoeven, a member of the Senate Energy and Water Appropriations Committee. “This is an important element of our efforts to build permanent, comprehensive flood protection for the region, and it bolsters the increased funding we have advanced for Army Corps construction as well as P3 projects like this one. We appreciate Administrator Wheeler for working with us and selecting the Fargo-Moorhead region to participate in this program, which represents significant savings to local taxpayers.”

“Innovative financing programs are at the core of 21st century infrastructure projects like the Fargo-Moorhead Diversion," said Congressman Kelly Armstrong (ND-AL). "Federal and local cooperation are vital to protect life and property from catastrophic flooding."

The MOU renews a longstanding task force, which is made up of EPA and state oil and gas leadership, to better communicate and collaborate between the federal government and the states. Together, EPA and IOGCC leadership will continue to promote protection of human health and the environment, while recognizing each other’s missions, responsibilities and authorities, increasing efficiencies and facilitating the exchange of information and expertise.

MFDA’s Fargo-Moorhead Metropolitan Area Flood Risk Management Project will protect nearly 245,000 people from flood events and restore the environmental quality of the area by preserving fish passage connectivity in the Red River Basin. This project is estimated to cost $1.1B and MFDA is invited to apply for $561M in WIFIA loan funding.

In this third round of WIFIA funding, EPA is offering $6B in loans that will help fund approximately $12B in water infrastructure projects. In July, the agency announced it received 51 letters of interest – demonstrating the critical need for continued investment in our nation’s water infrastructure and strong interest in the WIFIA program. The agency will make a formal announcement on all third round WIFIA projects in the near future.

To date EPA has announced 12 loans totaling over $3B in WIFIA credit assistance to help finance over $7B in water infrastructure projects and create over 12,000 jobs.

Prior to the MOU signing, Administrator Wheeler addressed attendees at the EmPower ND Energy Conference. In his remarks, Administrator Wheeler highlighted North Dakota’s role in America’s remarkable energy progress and how President Trump’s agenda is continuing that progress. From repealing and replacing the Clean Power Plan to expediting energy infrastructure projects, Administrator Wheeler discussed how EPA is fulfilling the President’s agenda and ensuring America remains a global leader in affordable, reliable energy that is extracted and produced in a manner that protects the environment and public health.

While in Bismarck, Administrator Wheeler participated in a “waters of the United States” roundtable hosted by Senator Cramer alongside North Dakota state, agricultural and business leaders.