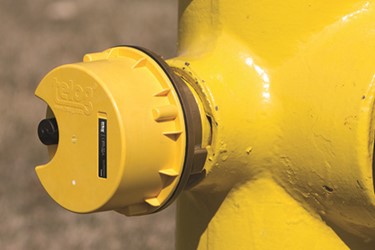 GPS
The Telog HPR-32G and HPR-32iG recorders are equipped with an optional GPS feature. GPS combined with Telogers Enterprise web module allows users to spatially correlate HPR field data automatically. When the Telog HPR-32 calls in, it can be instantly tied to the HPR's location and displayed on the map.

Impulse Detection
The Telog HPR-32i and HPR-32iG are pressure impulse recorders that capture and store the waveform of water hammer and negative pressure transient events.

Battery Power
All Telog hydrant pressure recorders have low power requirements so they can be battery operated. The Telog HPR-32 series uses a single, user-replaceable D cell lithium battery. At a typical two calls per day, the battery will last up to five years.

Packaging and Installation
Every hydrant pressure recorder from Telog is a low-profile, rugged unit that is easily installed by one person on a standard 2.5 inch hose nozzle outlet. For ease of mind an optional security cover can be used to prevent vandalism. Once installed, data is immediately available using Telogers for Windows or Telog Enterprise software.