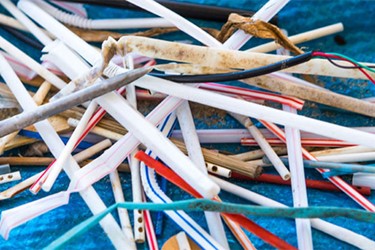 More than a third of plastic is used once then thrown away. It may be broken and ground into progressively smaller bits by the elements, but it lasts virtually forever. In the United States, more than 30 million tons of plastic is discarded every year. In the European Union, approximately 100,000 tons of discarded plastic ends up in the sea every year. More than 250,000 tons of plastic in 5 trillion pieces floats on the ocean’s surface, and straws are some of the most common single-use plastic items found floating.