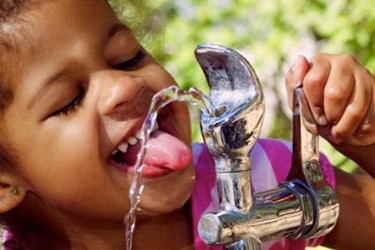 The township of Horsham, located close to the Naval Air Base in Willow Grove, PA, supplies drinking water to 8,000 residential, commercial and industrial customers using 15 deep water wells. In 2014, 5 of the wells were confirmed to be contaminated with perfluoroalkyl substances (PFAS). Perfluorooctanesulfonate (PFOS) and perfluorooctanoate (PFOA) were found in two wells at concentrations exceeding the US EPA then prevailing health guidelines of 200 ng/L and 400 ng/L respectively. These wells were immediately taken out of service. In June 2016, one month after EPA issued a lower revised guideline of 70 ng/L for the combined concentrations of PFOS and PFOA, three more wells were removed from service. The township began purchasing supplemental water from a nearby water supplier and began installing granular activated carbon (GAC) filters to remediate and return the 5 impacted wells to service. Responding to consumer concerns, the township adopted an aggressive removal plan to reduce average PFOS/PFOA concentrations to less than 1 ng/L (essentially to non-detect level) in its entire water system by the end of 2016.