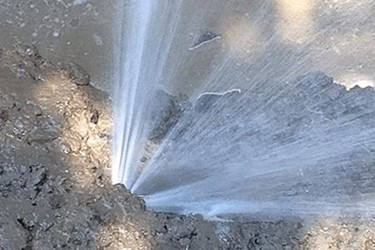 Early leak detection is vital for distribution systems, with the ability to identify system failure points before they impact customer service levels. When water resources are limited, early leak detection is a valuable tool in reducing non-revenue water and extending pipe asset life. The EchoShore®-DX platform is a fixed leak detection technology that is changing the way water main leaks are identified and repaired.

In Pennsylvania, the EchoShore-DX platform identified a leak near the time of its formation and track its progression in a susceptible portion of the distribution system. It took several attempts to identify the leak using conventional ground sounding equipment – even after the leak had been tracked for several weeks by the EchoShore-DX system. Once excavated, the leak was confirmed at the spigot's end and was losing an estimated 5 gallons per minute of water.

West Virginia American Water in Charleston, credits the EchoSHore-DX platform with reducing water loss by 2.3 million gallons per day (MGD) in the first four months of operation – of which 90% of the leaks had not surfaced before repairs were made. Another 2 MGD of water loss was recovered from a transmission main leak, picked up by the EchoShore-DX system through ground vibration.

EchoShore-DX platform incorporates the latest generation of acoustic sensors that are the result of Echologics pioneering success with correlating leaks on a variety of pipe materials and large diameter mains.  The sensors are built into a standard fire hydrant cap and  are capable of identifying extremely faint acoustical noises emitted by leaks before they become detectable by conventional methods.  This early detection capability enables utilities to prioritize repair based on actual need and the most effective allocation of repair crews.

The platform is designed to provide more accurate information on the location of a leak.  A key advantage of the EchoShore-DX platform is that it performs a system-wide leak detection correlation when first activated. Identifying and repairing any existing leaks enables creating an accurate and known acoustical baseline for the monitoring zone. This results in exceptionally high detection accuracy of any leaks that may develop in the future.