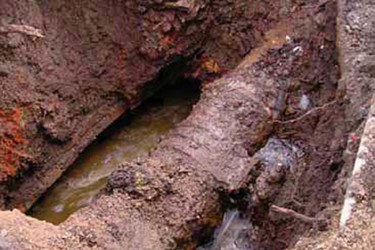 The leak was discovered by correlation in July of 2008. Shortly after its discovery the location was excavated to investigate and repair. Upon exposing the pipe it was realized that the leak was emanating from a joint on a 6” Tee. The water was not reaching the surface because it was draining into a sewer main.

It was estimated that the rate of water loss was 100 I/min. It is unknown how long the leak existed but it was long enough to cause erosive damage to the top of the sewer main.